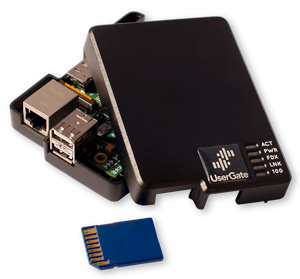 The Raspberry Pi platform has been harnessed by the specialists at Entensys to assemble a test model of the UserGate Web Filter content filtering system. The successful experiment on the diminutive hardware is part of ongoing work to port Entensys software to ARM processors, which offer exciting opportunities for creating new compact, inexpensive devices.

Weighing only 94 grams, the test model easily fits in the palm of the hand. The unit’s minimal cost makes such filtering solutions available to a wide range of user categories, including home users, schools and non-profits, including those in developing countries with rapidly growing Internet use. Support by UserGate Web Filter for ARM processors will allow obtaining even better performance from similarly inexpensive and compact devices, including on other platforms. The ability to port UserGate Web Filter to such modest hardware is proof of the software’s high performance and ability to process enormous traffic flows on traditional server systems.

UserGate Web Filter filters content for schools, libraries, and companies, as well as ISPs and public Wi-Fi access points. The product combines multiple methods of content filtering for high accuracy, a low rate of false positives, and compliance with applicable legislation (including such regulations as the Children's Internet Protection Act (CIPA) or ru legislation on child protection).

The Raspberry Pi is an affordable, compact British-designed single-board computer based on an ARM CPU. Developed by the Raspberry Pi Foundation, the project is designed to spur mass use of computers and improve computer literacy. The device is currently available in two versions, “A” costing $25 and “B” (with Ethernet) costing $35. Approximately 800,000 Raspberry Pi devices have been produced to date.